Clive Atkins was born in Montreal, grew up in Calgary, played basketball with the Medicine Hat College Rattlers, moved to Saskatoon to grow his career in the restaurant industry, and after approximately 10 years, he moved back to Medicine Hat to manage the locally owned downtown business, The Mezz and Nineteen 11.

“Medicine Hat has really grown, and when I saw the inside of The Mezz and Nineteen 11, I knew I had to come back." - Clive Atkins.

After his moved in June 2021, he received a friendly welcome from the community and says neighbours are always eager to say hello when passing him by on the street.

“People are always greeting each other here. It’s an every day, every neighbourhood thing that I really enjoy,” he says.

Atkins describes Medicine Hat as laid back and relaxed. There is time to enjoy the moment and appreciate the beauty of the coulees and trees that surround the 65,000 residents in the community.

“The downtown atmosphere has really become a lively place. There is a lot going on down here, and I love it,” he says. “It is now the place to spend your time, and the historic and classic buildings remind me of Vienna and the canal.”

He and a co-worker found Medicine Hat’s largest entertainment centre, Six one Six Entertainment, which has become their new favourite place to axe throw and rent the virtual reality space.

It’s the size of the city that Atkins likes about living in Medicine Hat. He is still able to run into and visit with people he knows when he adventures the city.

“To be honest, I’m really grateful to feel so welcomed into the community so quickly,” he says. “And I’m pumped that the city is so embracive of local businesses like The Mezz and the Nineteen 11.”

Owner of The Mezz and Nineteen 11, Don Dempster, was a huge encouragement for Atkins to move to Medicine Hat. Atkins knew instantly that the work environment was one he would be proud to be a part of, and that he and Dempster would work well together.

Atkins looks forward to immersing himself more in the community, meeting more people and establishing and growing The Mezz and Nineteen 11.

“Medicine Hat has really grown, and when I saw the inside of The Mezz and Nineteen 11, I knew I had to come back,” says Atkins. 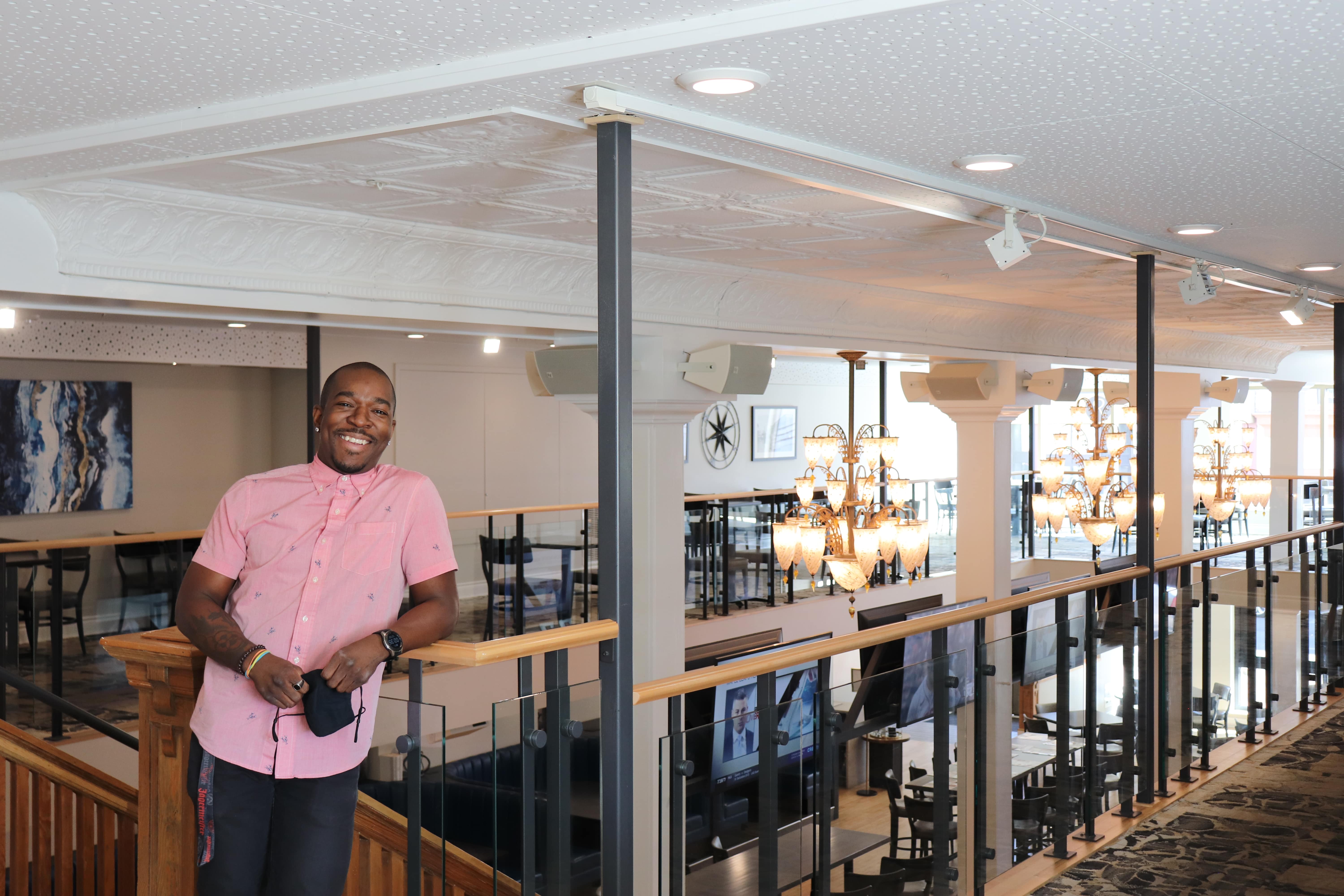 Clive Atkins smiles on the second level of The Mezz, where the chandeliers were imported from Italy and the original flooring and staircase was polished and kept intact during the renovations.